3 Reasons Why Hustling is Hurting You

There is this immense pressure these days to DO MORE.

But it’s a lie. These “HUSTLE!” voices aren’t going lead us to the stuff we actually want.

It’s not going to make you more likely to be that dad who really shows up at the dinner table the way you actually want to.

It’s not gonna make you more likely to be a writer who lives in that powerful peace of fulfilling creativity.

It’s not gonna bring long-term wealth that leads to that kind of engaged fulfillment.

NO. Hustle’s just not going to get you stuff like this. There’s more to this story…

So here’s three reasons why HUSTLE is actually HURTING us.

Now, we’ve all heard those motivational, talking-head entrepreneurs tell us to work harder and that we just gotta get out there and do it.

And I’ve got to be honest — the first thing I feel when I hear these guys speak … is motivation.

FOLLOWED IMMEDIATELY by some body-flushes of anxiety.

I gotta just hustle.. but on what??

What’s gonna get me the results??

WHAT IF NOBODY FINDS IT!??

Hustle as a way of being in creative work looks like this: 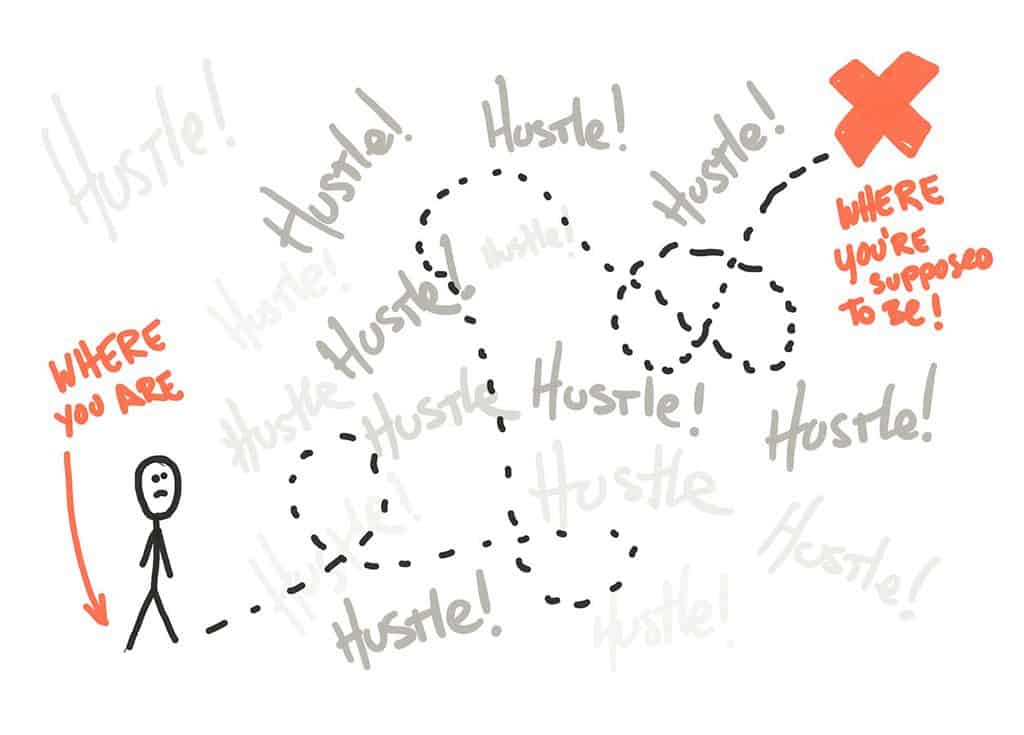 It just floods your system with anxiety.

Because it convinces you that where you are is NOT ok, that you just gotta muscle up and get to where you’re SUPPOSED to be and that everywhere in between is failure.

It puts you in a kind of fight or flight mode, letting anxiety — something that serves us well when we’re being chased by tigers on the plains — steer the ship.

Making business decisions when you’re anxious is like shopping for groceries when you’re starving — you end up with a ton of junk at the end of the day.

So, the first way hustle hurts us is it lets anxiety run the ship, which means we don’t end up doing work we’re proud of or making decisions that matter.

2. Hustle tries to sprint a marathon

Hustle makes us feel like we’ve got to be sprinting ALL. THE. TIME.

But most of our best work as creatives and entrepreneurs comes out when we’re moving at a marathon pace.

There’s no surprise why so many successful people use the metaphor of a marathon to talk about their journey.

But — and I feel for all of us here — watching people we admire in social media, tracking book launches or product releases or funding rounds… it’s like being a spectator at a marathon.

You’re at this one little corner of the track, and you see these runners just whizzing by. 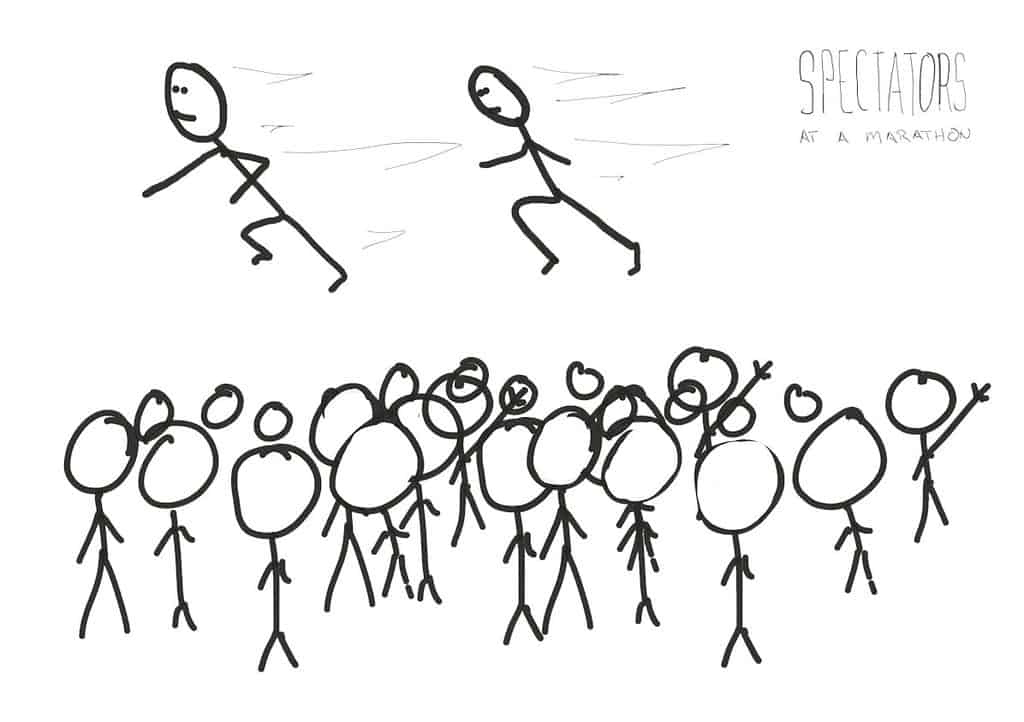 Elizabeth Gilbert is so amazing…

oh that guy is flying…

and that lady is catching up too…

You see them wiz by and it looks like they run at that speed ALL the time.

But what you’re really seeing is one little corner of the entire marathon. 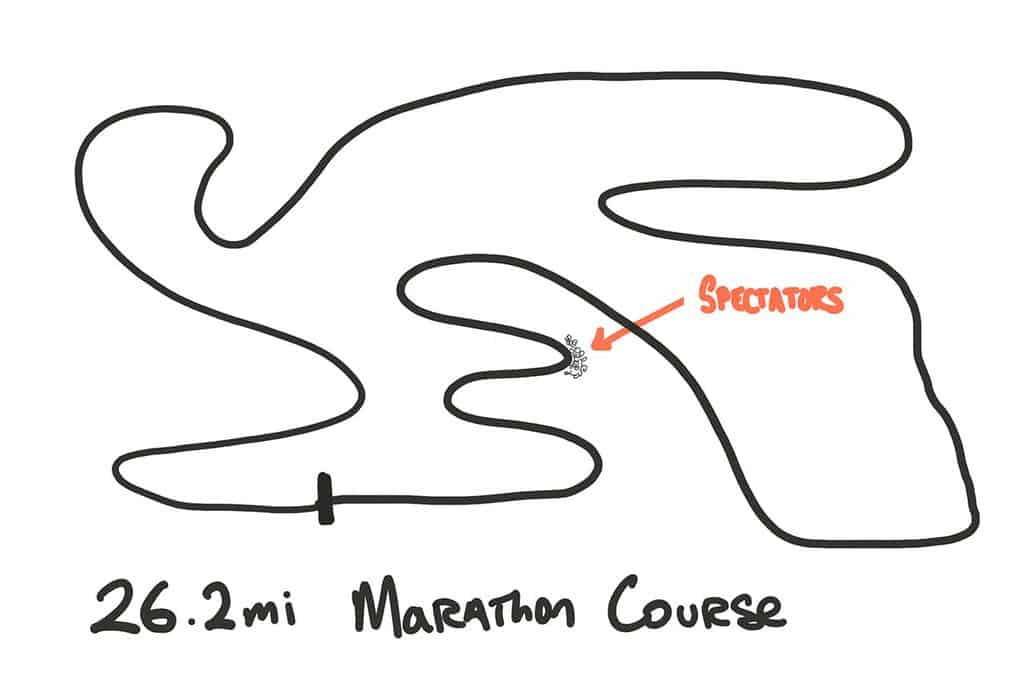 You don’t see the super hard hill climb just around the bend, or the 16 miles they were running on their own, all alone, footstep after footstep at a marathon pace, rationing their strength to make it all the way.

Nobody’s tweeting during those times.

Nobody’s getting articles written about them when they’re just plodding along, writing day after day.

If they were the headlines would read something like:

“Local Author ‘Feeling Pretty Shit’ About How The New Book’s Coming Along.”

“Illustrator ‘Super Pissed’ About Not Having Any Good Ideas Recently.”

When all we see is one little corner of the marathon, it feels like everyone else is running faster.

And this pressure to “always be hustling” feeds on that insecurity.

So that’s the second way hustle hurts us: it tries to sprint a marathon, making us feel like a marathon pace is basically giving up. Which is bullshit.

3. Hustle burns you out

You see, hustle is an outward expression of an inward anxiety.

This is the lie, the shitty psychology that gives hustle it’s strength.

In the hustle worldview, you’re a candle just waiting for someone (or something) to come by and light you up.

But what any experience in personal development will teach you is that YOU ARE ALREADY LIGHT. You’re like a SUN, a massively combusting, non-stop, roiling boil of heat, energy and light.

So why do we cover it up and wait for others to turn us on?

I can’t think of a better recipe for burnout than to focus our efforts on some external validation.

Reason number 3 why hustle hurts us is because it tries to force us into this lie, that we’re not good enough or successful enough, that we have to do more in order to become someone worthwhile.

It’s a lie that’s going to lead us to burnout.

We want to change our lives!

There’s a strong desire to hustle! We want to change our lives, shape it more on our terms.

This is noble! This is good.

1. it let’s anxiety control the ship, causing us to make decisions in a fight-or-flight mode that leaves us with a pile of junk at the end of the day.

2. it tries to get us to sprint a marathon and makes us feel like failures for setting a realistic marathon pace.

3. it wants us to look to some outside source (money, recognition) for validation, pushing us towards burnout.

Well, I already think you’re the sh*t. Screw hustle. We’ve all gotta work hard, but inviting the hustle worldview in can be like staying with an abusive partner. We don’t need that bullshit drama.

Want to go deeper on how to do better creative work? Listen to this episode of the podcast: Antihustle — Why Hustling Hurts You (FS161).