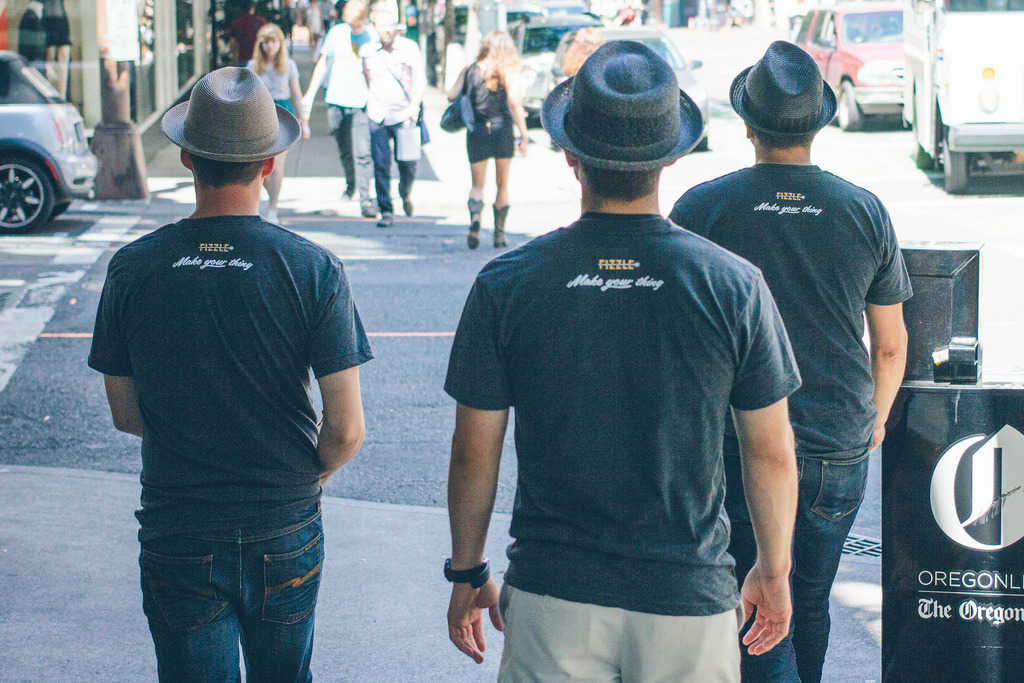 Note: This is the last of our four-part WDS 2014 recap from the Fizzle team. You can read the other three here: Chase’s, Corbett’s, and Caleb’s.

I’m back in the saddle after another trip to Portland for World Domination Summit (WDS), put on by Chris Guillebeau and company. 2014 was my third year attending the (un)conference, and I took away lessons that you can just as easily apply in your own work and life.

With every passing year, I’ve found that my takeaways remain consistent, perhaps even honing ideas planted as seeds in previous years with each passing weekend spent in Portland. As I settle back into work in the aftermath, I find myself thinking along three major axes related to work.

The Axes: Me, Money, and Alone? or Customers, The Work, and Community?

Chase has a great line in one of our Fizzle courses, and he repeated it with great success at our WDS Academy. It goes something like this:

It represents the approach most people take to business. They make decisions based on their own wants and needs, failing to take into account the wants and needs of their customers. Sometimes this can work, but it’s a terribly short-term outlook when it comes to building a sustainable business.

The more time I spent in conversation with good people at WDS, the more I realized that the most “successful” people take the opposite approach. That really hit home when a friend said, “We know we’re successful when we help our customers reach 10x their stated goal.”

Yes. It’s her company’s stated goal to produce 10x expected results for their customers on a regular basis. And that is what it means to focus on the customer.

When you frame a problem in the context of, “What do we have to do to help our customers reach 10x their stated goals?” it becomes much easier to brainstorm, prioritize, experiment, and take action. You’re guided by a clear vision of what the customer wants and needs.

The funny thing: when you delight customers in this way your business grows, your customers believe in you, and you are more likely to reach your goals faster.

At Fizzle, we think the same way. Every week I ask myself the question: “What can we do this week to help more Fizzlers build profitable businesses?” That has nothing to do with what is easy or with what I necessarily want to do. It has everything to do with overdelivering.

You won’t be surprised to hear that in the online world, that’s not the most common approach. And that can make it feel lonely from time to time. But WDS reminded me that focusing on the customer first is the right way to do business, and it’s the way we’ll continue to approach member success at Fizzle.

2. Money vs The Work

I’ve been on both sides of that coin. And I have news for you: we all need to pay the bills. Literally every single one of us struggles with the same exact challenge related to our career: how to pay the bills while doing meaningful work.

You know, the work for the work’s sake.

Judging by the fact that 70% of Americans are disengaged at work, I think it’s safe to say that majority of people work because it’s the easiest way to get paid. When I was running Living for Monday, I suffered from this constantly. Because I planned poorly, I ran out of savings long before the business was self-sustaining. As a result, I made nearly every decision through the lens of what would make me money the fastest.

It’s not a stretch to say that is the single most important reason the business failed. I stopped writing high quality posts at a point when audience growth was taking off so I could focus on “monetizing” the audience I already had. I took on an investor because I had no money for groceries. I completely pivoted our business model because I thought it would get us to profitability faster.

The people and conversations at WDS 2014 helped me solidify the fact that making decisions solely based on the money involved is almost never the right approach.

So what’s the alternative to focusing on money?

With the exception of a 1-month stated hiatus in June 2014, James Clear has written articles on his blog almost every Monday and Thursday since I first met him at WDS in 2012. After building an email list of 100,000+ at PassivePanda.com, he chose to start over to focus on the work at JamesClear.com.

He started from 0 subscribers in 2012 and he’s already reached 70,000 new subscribers on his email list.

The first question most people would ask is this: “What tactics did he use to grow his list so fast?” “What landing page software is he using?” “What email marketing provider does he think is best?”

And immediately you’re in the weeds, missing the key point to James’ success. He focuses on the work itself. He takes joy in writing outstanding articles that serve his audience. He doesn’t make decisions based on list growth. He makes them based on the needs of his audience and doing great work consistently.

The money is not the point. The work is the point.

3. Alone Vs Amongst Community

Thomas Edison was a genius. He worked alone in his lab, day and night, eventually racking up over 1,000 patents to his name. He was one of the few who could truly work alone to create remarkable work, independent of the criticism and influence of others. Right?

We’ve built inventors, business moguls, and politicians up in our minds as solitary creatures with outstanding creative genius. We believe they have an uncanny ability to withstand piercing criticism and resist the temptations of ordinary humans.

None of that is true. Not even the Thomas Edison part, except for his number of patents. Edison had a team of scientists working alongside him, many of whom made key discoveries that resulted in his lab growing in prestige and his patents growing in number.

It would be easy to believe that our favorite online personalities has something we don’t. That they have thick skin and can work for endless hours without even looking up. That they know exactly what comes next, what their customers want, or how to make the right decision. That they don’t struggle with building habits or doing the right thing.

But the reality is that there is no such thing as doing work that matters in a vacuum. It just doesn’t happen.

Every single one of the people I respect around the web prioritizes building a community of support by going to conferences, participating in mastermind groups, and/or finding mentors to help them grow. I’ve seen the power of each of these in my own life, but this year at WDS, it only became more apparent.

I believe in supporting people and projects that value community over the individual. That belief is built right into the fabric of WDS through the values of community, adventure, and service.

In my mastermind group alone, we have helped each other make major decisions on launching products, writing books, spending money, or serving customers. What I found at WDS was like a larger, in person mastermind group that represented my ideal life in which I have strong relationships with people who constantly push me to be more of who I know I am.

Every weight lifter needs a spotter. Every author needs an editor. Everyone can benefit from a community of people who share their values and support their goals.

The Customers, The Work, and The Community

When I take a step back to consider what I learned at WDS 2014 (and what I think applies to people who want to do business the way we do at Fizzle), it comes down to three things.

Focus on the work as the reward. Make decisions that help you do great work, independent of the result. Money is what happens when great work finds the right people.

Build community that empowers you. There are no solo acts (even the ones we think are solo acts). No one is immune to the haters. No one knows all the answers. We can all benefit from being surrounded by people who believe in us more than we can believe in ourselves.

Creators: Grow an Audience and Get Paid for Your Work

At Fizzle, we’ve worked with thousands of creative entrepreneurs, helping them find customers and get paid.

Our acclaimed training and coaching program is now offering a free 14-day trial. See if Fizzle membership is right for you »