How to Produce High Quality Videos for Under $1,000

I’ve always enjoyed making videos, but after seeing the ridiculously awesome quality of the videos put out by people I follow – the Fizzle guys, seanwes, Pat Flynn – I got discouraged, because they all revealed that they were using $3,500 cameras and other expensive video equipment.

Since I’m not at the stage where I’m comfortable dropping that kind of cash on video gear, I just didn’t make videos for a long time. However, a couple weeks ago my friend Andrew gave me some inspiration; he actually went to school for video production for a while, and he showed me some resources I could use to make videos for far less money.

So, for the past few weeks I’ve been learning, tinkering, and teaching myself how to create great-looking videos without having top-notch equipment. As of this writing, I’ve created three videos; here’s the latest one:

For the rest of this post, I’m just going to geek out and share everything I’ve learned about making videos on a tight budget. I put $1,000 in the title, but you could actually do it for far less (the camera is the main expense).

Here’s an overview of what I’m using in my setup, along with prices (and links to Amazon for the things I bought there):

1) You don’t need a super-nice camera for making video. As you can see, I’m taking a pretty substantial step down from what the Fizzle guys are using (I believe Canon 5D Mark III’s), and you can go even further down the ladder and still get great-looking video.

Yep, I’m talking about using your iPhone. As long as you stabilize it and have good lighting, your phone can shoot perfectly good video.

In fact, my friend and fellow Fizzler Matt Giovanisci shot a lot of this video on his iPhone (and it looks great):

The only thing about using an iPhone is that you won’t get the blurred backgrounds like you can get with a nicer lens. Still, you’ll be making videos – which is the important part!

2) I recommended the particular camera above partly because it has a flip-up LCD screen. That’s important to have if you’re going to be shooting video by yourself, as it’s hard to get yourself in focus without being able to see what’s on the screen.

My camera is older, however, and doesn’t have a flip-up screen. So my solution is to use a small LCD TV, which gets the feed from the camera’s mini-HDMI port. If you’re using an iPhone, I believe you can either use Airplay on an Apple TV, or get a Lightning-to-HDMI converter from Apple.

Here are a few pics of the completed setup! 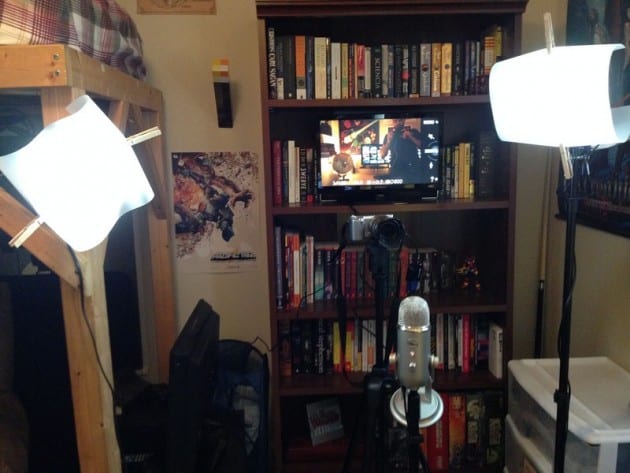 In front of me, I’ve got the camera and the mic right under it. The mic is out of the frame, but still close enough to me that it picks up nice sound (this is the mic I use for podcasting as well, so that’s why I’m not using a lapel mic or a shotgun mic – upgrades can happen later).

The lights are positioned a bit above me, spaced about three feet apart.

On the bookshelf, you can see my monitor (and also me). 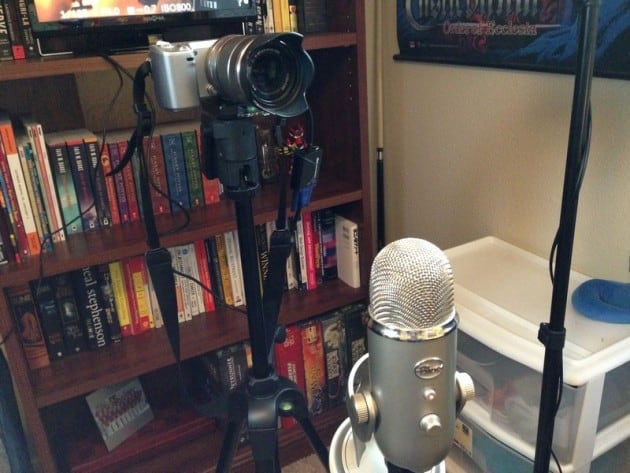 The actual camera and mic, close up. Note: Look for a tripod that has a ball mount. It works wonders. 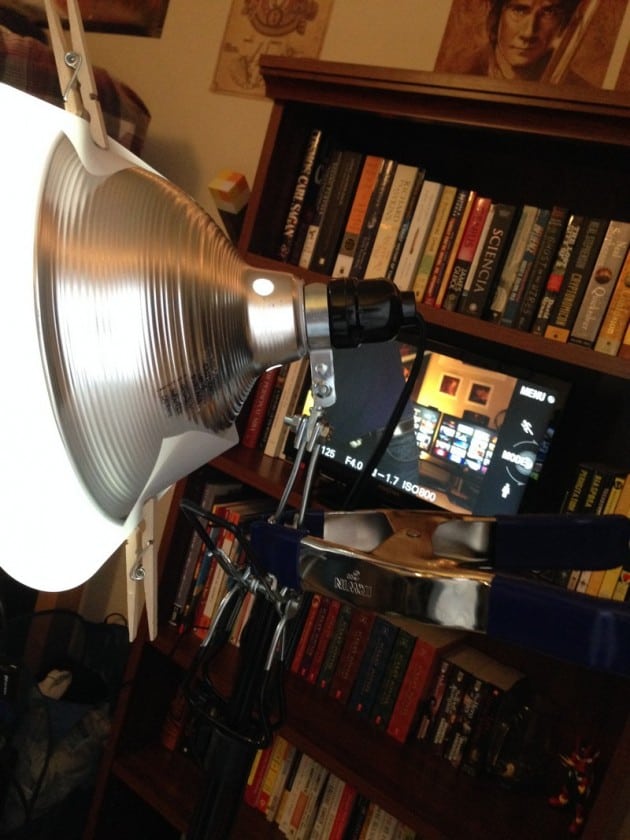 Here’s how the lights are constructed: 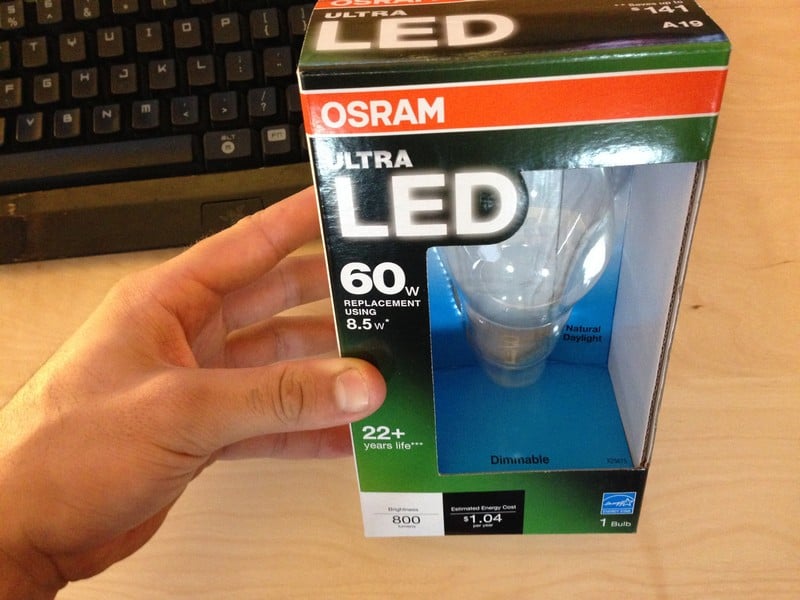 These, after much trial and error, are the bulbs I settled on. The important bits about them: 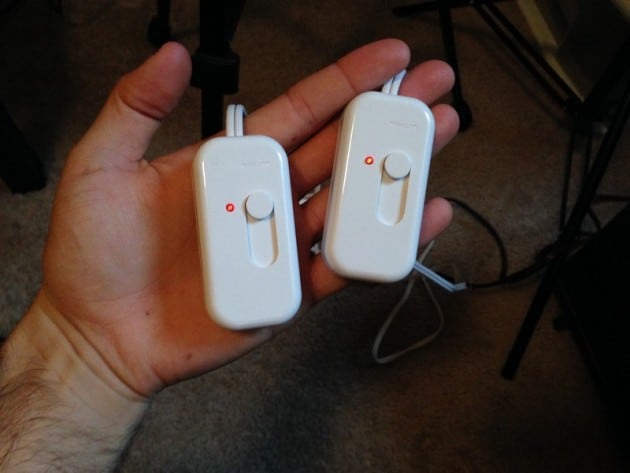 Lastly, I attach these tableside lamp dimmers to each of the main lights. I can actually hold the controllers in each hand while sitting in my chair, which lets me adjust lighting on the fly and get immediate feedback on the monitor. 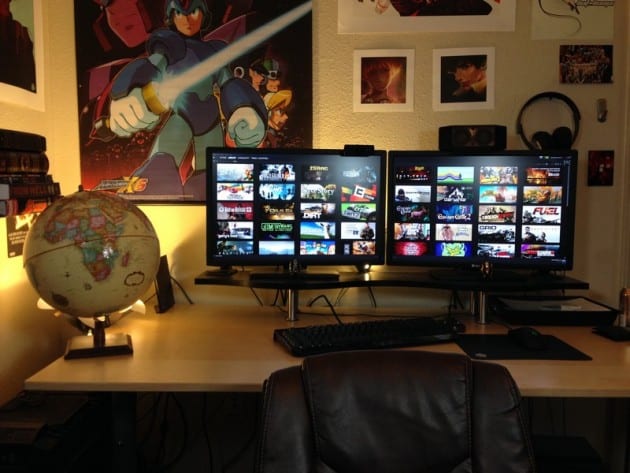 Here’s a shot of my backdrop. I added a couple of the same lights on the left side and behind my monitor, which nicely light the background.

If you’re going to have your computer monitors in the shot, you’ll probably need to decrease the brightness. I have mine set to around 45%.

Here are some…erhm – rich tips – about shooting that have worked well for me:

What about editing? Well, here are a few things to try out:

I edit my videos with Premiere Pro CS5. It’s an older version that you can’t get for a good price anymore, but you can subscribe to Adobe Creative Cloud to get the latest version. It’s $20/month for just Premiere Pro, or $50/month for the whole creative suite.

I use Photoshop to make pretty much all the titles (I can use more fonts this way) and graphics for my videos, and I also use Audition to tighten up audio, so having the whole suite is essential for me.

You can also try out Final Cut Pro ($300), something mid-range like Cyberlink Powerdirector ($60), or even use iMovie – which will get you most of the way. Likewise, Pixelmator ($20) replaces Photoshop, and Audacity or Garage Band can replace Audition for free.

I think it’s super-useful to break things you do often down into processes, so you can create an efficient workflow and improve specific things. Here’s my current process for making a video:

When I get an idea for a video, I’ll shove it into my “Rough Ideas” note, which resides in my Videos notebook in Evernote. Later, I’ll create a whole note for the idea and write out a bullet list with talking points I want to hit.

Another technique I use – something I learned from Sean McCabe – is writing first thing in the morning. Right after I wake up, I create a new note in my “Daily Writing” Evernote notebook, give it a stupid title, and then start writing. Usually I’ll write about nothing for a couple sentences – how tired I am, etc – and then I’ll gradually transition into writing about my video’s topic.

Doing this stream-of-consciousness writing lets me get out ideas and lines that I probably wouldn’t have thought of before.

Unfortunately, this step takes a while since I have to set up my little studio every time. I shoot in my bedroom, and since I currently live with 3 college roommates, there’s no other place to do it.

Once I’m set up, I’ll frame the shot and get situated. Then I hit Record and start saying my lines. I also hit record in Adobe Audition, which records the audio from my Blue Yeti.

Out of frame, I’ve got my iPhone in my hand with the Evernote outline in it. After I’ve recorded my lines, I’ll also shoot any needed B-roll. For my latest video, this included game footage and a screencast (btw, you can record screencasts with several tools – if you’re on a Mac, Screenflow is the best. On Windows, I actually use a free tool called Apowersoft Recorder, which is ridiculously good for a free tool.)

Before editing the video, I improve the audio’s quality a bit in Audition. Here’s a Tumblr post I wrote a while back on my podcast’s audio settings; the settings for my videos are exactly the same. With the effects applied, I’ll re-save the audio in WAV format.

Once I’ve imported my footage, the first step is to get it onto the timeline and sync the audio to it.

The next step (and this takes a while) is to go through, chop it up, and cut out any lines that I flubbed. Then, I trim all the jump cuts down until they’re smooth. When you’re cutting and moving footage, it’s important to select both the video and audio tracks so they stay in sync. 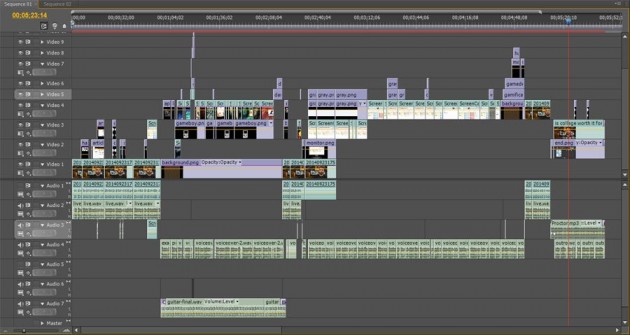 After that, I’ll start working concurrently in Photoshop. I’ll create titles, overlays, and graphics, then import them into the video workflow. I’ll also sync up sound effects with them. 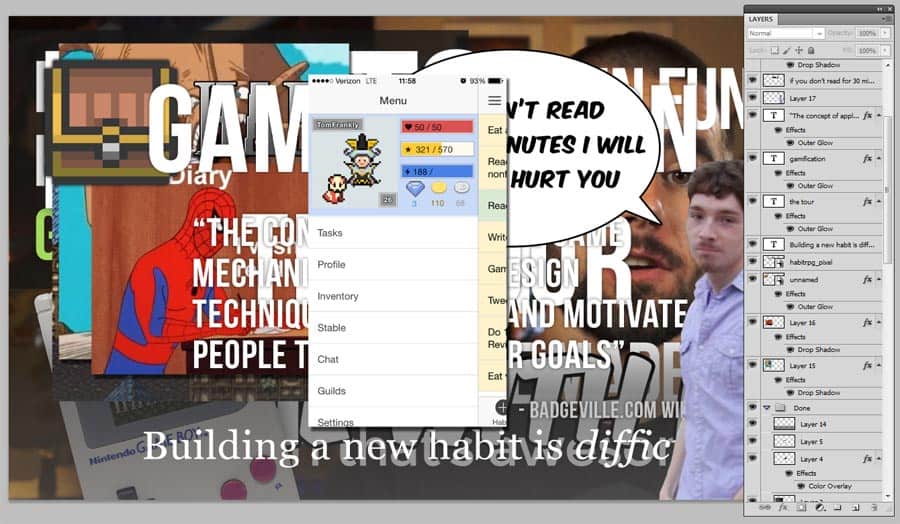 While in Photoshop, I’ll also create a custom thumbnail for the video, which I’ll add when uploading to YouTube. To do this, I just find a frame from my footage where my face doesn’t look stupid (there aren’t many of these), screenshot it, and then add some graphics and a title.

I also take some time to create an end-card, which shows viewers another video they can watch, a subscribe link, and can promote other things like my Twitter. 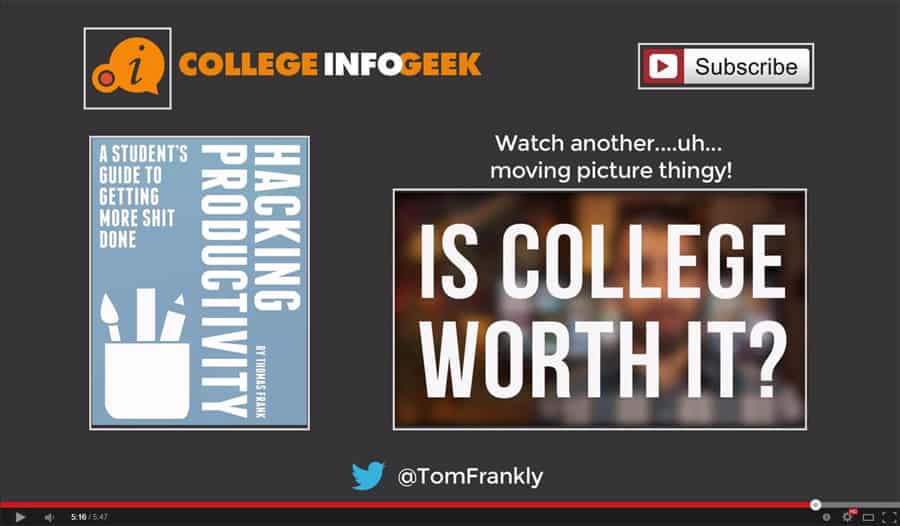 Once the editing is done, it’s time to export! Here are my export settings, which I learned from this video:

After one last watch-through, I’ll upload the video to YouTube. Then I’ll give it a title, description, tags, and other data. Once it’s finished uploading, I go in and add annotations to the end-card.

Lastly, I’ll write a post on my blog featuring the video!

I’ve seen a few threads around Fizzle asking whether you should use YouTube to host your videos, or go for a paid solution like Wistia. I think the choice depends on your specific business setup and goals, but here’s why I’m going with YouTube.

My audience is college students, and I know I spent a lot of time on YouTube in college. I still do, in fact; when I eat lunch, I usually watch a few videos from my favorite gaming channels.

Simply put, there are a lot of people on the site, and there’s a lot of potential for widening your audience through the YouTube platform with things like Related Videos. With Wistia, your site is the platform (though I do wish YouTube had Wistia’s analytics).

Secondly, I eventually want to do collaborations with other YouTubers. Channels like Did You Know Gaming? cross-promote by having a different YouTuber do the voice-over for each episode. Epic Rap Battles of History gets other YouTube celebs to be guest rappers. Lots of other channels do collabs as well, which are great for getting in front of a new audience.

Integrating Video on Your Site Beautifully

If you watch my video on my actual site – or if you’ve seen Chase’s CEO vs. Worker Bee video – you’ll know that YouTube videos can be embedded beautifully right on your site. However, getting it to look that way isn’t as simple as throwing the embed code into the WordPress editor.

While this post isn’t about customizing your site’s theme, here’s the gist of how I did it:

The best way to make better videos – besides just making lots of videos – is by learning from people who are awesome at it. Learn from the explicit things they teach you, but also learn from what they do. I try to get better at making videos the same way I get better at web development – I closely analyze what the pros do and try to teach myself their techniques.

That being said, here’s a list of some resources and YouTube channels I study. Some of them actually teach you how to make better videos, while others are just personal favorites.

I’d like to round this post out by issuing you a challenge, should you choose to accept it:

Publish a video in the next 7 days.

It doesn’t need crazy editing, it doesn’t need immaculate lighting, and it doesn’t need to be perfect. If you made it all the way down here, I’m betting you’re interested in doing video – so take a few hours and put a first attempt out there!