What’s the Right Amount of Prep for Your Launch? (FS070)

🎙️ Listen to the episode:

Listener of the show, Adam, has an idea he really believes in. He’s worried about walking that line. What’s the right amount of prep before he launches?

After an unusually large portion of ballyhoo we dive right into Adam’s question and share what we’ve learned about the balance. Enjoy!

If you want to know what’s on my mind literally at this moment (as in tonight), it’s how to find the line between good preparation and launching recklessly There’s a lot of talk about “MVP” and “just get it out there” and “if you’re not disappointed with your launch, you waited to long”, etc. But I think something gets lost in that mindset.

I’ve built most of my projects with the “build it and they will come” philosophy. But I REALLY believe in my newest project, and believe it has the potential to become a full-time/rest of my life kind of gig. Which means, I need a plan. I don’t want to waste initial momentum. I want to really prepare well for success, rather than just throw it out there and see what happens.

BUT (there’s always a but), I’m not sure where that line is. At what point do I say, “I’ve prepared, I’m confident and now it’s time to launch.” How do I know when I’m there? Or better yet, how do I know when I’ve crossed that line and am just being the self-doubting, perfectionistic ass hole that I usually am?

Friend of the show Doug Neill made this little sketchnote of the episode we wanted to share with you here. Thanks, Doug! 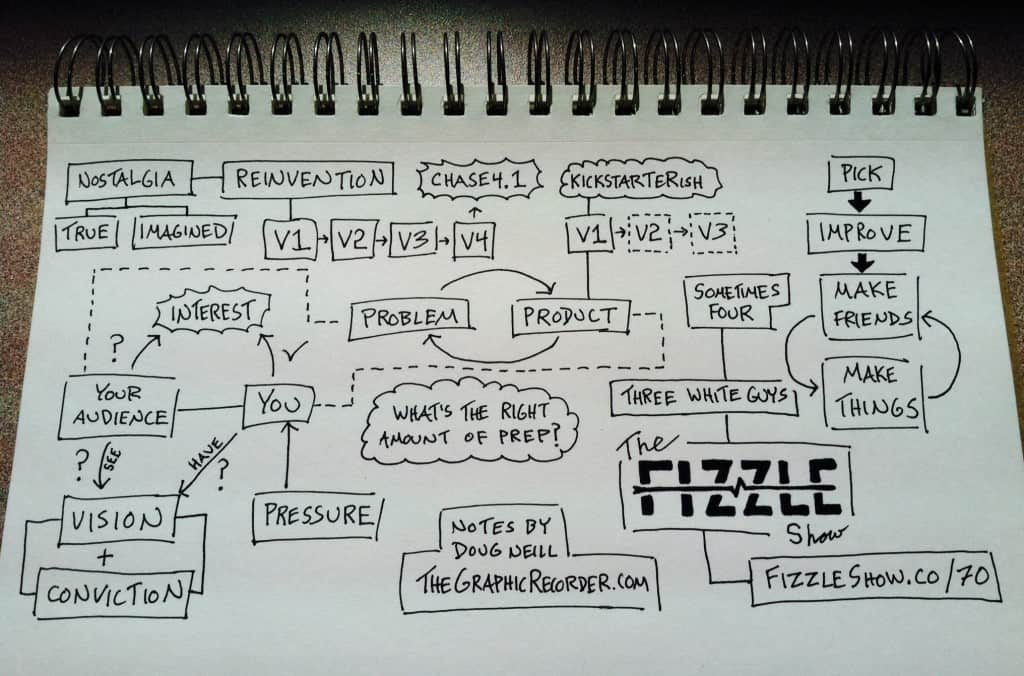 Roderick on the Line – The Best Of — My favorite podcast right now (besides YMIW). This is a list of the best of.

The Gently Mad – Goodstuff FM — This is Adam’s podcast. Here is where he interviewed me!

Bird by Bird: Some Instructions on Writing and Life by Anne Lamott — My #2 book on writing.

On Writing: A Memoir of the Craft by Stephen King — My #1 book on writing.