This simple tool makes Twitter much more valuable to people who create and publish things online. Here’s how.

If you’re logged in to Twitter, just visit analytics.twitter.com. You’ll see a bunch of interesting data on this page, including the following:

Then, below that graph, you’ll get a chronological listing of your tweets, including numbers for impressions, engagement and engagement rate: 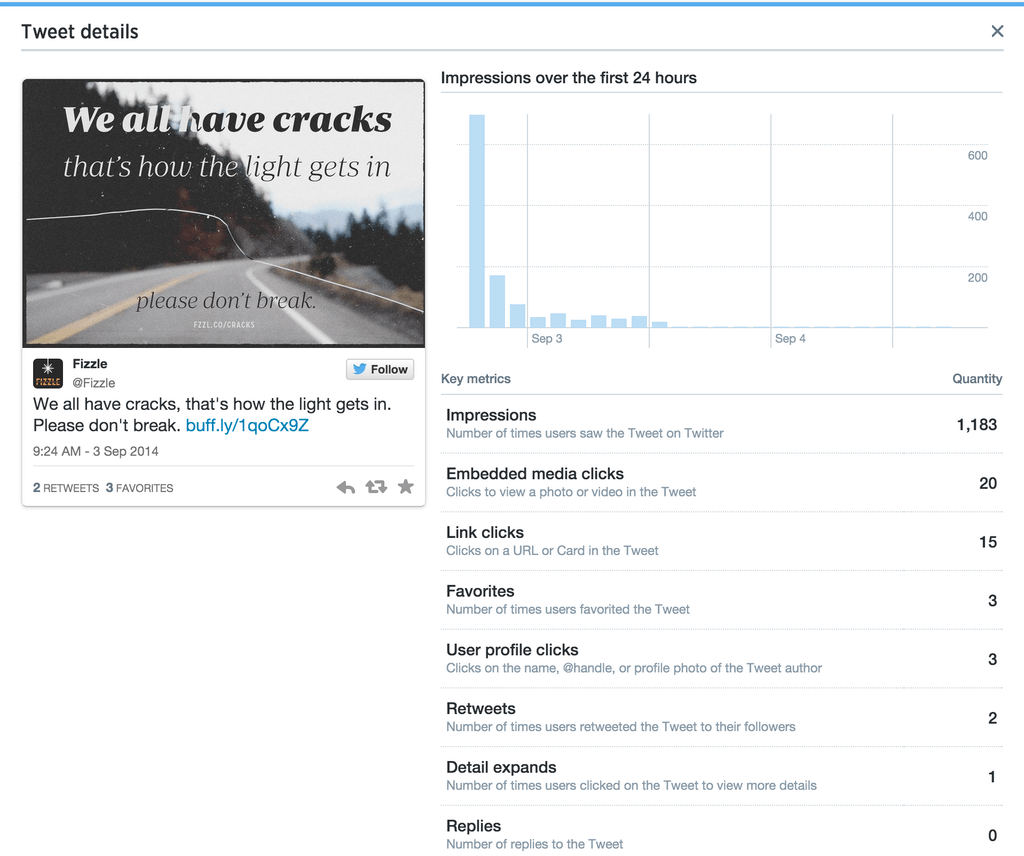 This detail hasn’t been available before, and it’s gold.

“Total number of times a user has interacted with a Tweet. This includes all clicks anywhere on the Tweet (including hashtags, links, avatar, username, and Tweet expansion), retweets, replies, follows, and favorites.”

This goes beyond just favorites and retweets. When someone clicks a link or avatar or expands the tweet, that counts as well, along with replies and follows from a tweet. This is a great measure of how interested people are in any particular tweet.

Now, don’t worry about the absolute numbers, or about comparing your account to other accounts. I’m not even sure if Twitter’s analytics count activity through tools like Tweetbot as well, but it doesn’t matter.

What we care about is relative performance, between tweets of similar types, from the same account.

The value here is that we can quickly see how people react to different headlines, ideas, quotes, images, etc.

This is from the same @fizzle account. Now we see that people weren’t really interested in the idea of “get on the list to get it in your inbox every tuesday.” That tells us something interesting.

We also know that the following tweet got a much higher response, with 122 total “engagements:”

These stats are all cues about what your followers (and their followers, from retweets) are most interested in.

You might already know some of this, from comments and shares on your own content, but the real value comes from being able to see engagement stats on ideas and thoughts and quotes, and when you share content from other sites. This is where your ideas will come from. More on that in a minute.

Here are a couple of other interesting observations from our data (this is data from our specific account, so your mileage may vary):

Note that you can export your stats as a CSV file, and pull them into a spreadsheet. The exported stats contain details like number of retweets, replies, favorites, profile clicks, url clicks and much more, on a per-tweet basis.

Now, here’s how to find ideas from your Twitter analytics data.

Writing entire blog posts to test ideas and see how people react takes hours. You can short-circuit this process by posting tweets on different ideas first. Then take the most engaged tweets and turn them into blog posts, videos, etc.

"Don’t worry about the money. Love the process." – Joan Rivers

The concept + quote from that tweet could make a great blog post. Of course, Joan Rivers just passed away, so part of the interest might be from the timeliness of the tweet. This is an art, not a science.

Another place to look for ideas is from the engagement/impressions numbers on links you share from other sites.

For example, I noticed in tweets from my own @corbettbarr account that links to my friend James Clear’s blog were more engaging than my average tweet:

This tells me that my own followers are interested in the topics James writes about (and in his catchy headlines). Based on this, I should at least post more stuff from James, or perhaps I should write my own posts on similar topics.

Hopefully you’re getting the gist. By using Twitter’s analytics, you can short-circuit the process for finding great blogging/content ideas.

Post frequently, and try different thoughts, quotes and links to other sites. See how people react, and use those reactions to guide which content you create next. If you’re thinking about a specific idea, you could post several short soundbites to help figure out the right “hook” for your post, or even a specific headline.

Have you used Twitter’s analytics yet?

Head over to analytics.twitter.com now and see what you can learn from your own data. Post below if you have experiences or questions to share.