One Simple Tip to Aim True & Stay Focused in Your Business

Have you heard Marc Maron’s podcast? It’s called WTF and it’s consistently at the top of the podcast charts.

Recently Maron interviewed the inimitable Billy Connolly and I found a scene in the conversation that holds a killer insight for entrepreneurs.

In case you don’t know these guys: 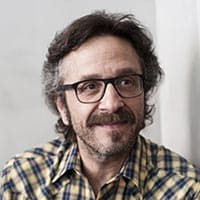 Marc Maron: intellectual comedian. Hard worker, a comedian’s comedian, but not much popular success for the first 25 years of his career. Started a podcast in 2009 interviewing other comedians. It blew up real big. Great mind. Manic. 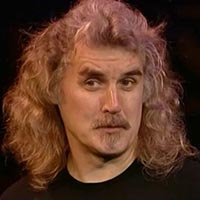 Billy Connolly: Scottish comedic force of nature. Massive around the world, especially across Europe. Insanely brilliant story teller. Been working on stage since the 60s. An absolute legend. (Also, played the dad in Boondock Saints.)

So Maron finally gets a chance to interview the legend Billy Connolly. Here’s a bit that happens early on in the conversation:

Maron: I find that sometimes sitting around and talking to other comedians, depending on the show you had, could go any way, depending on how you feel.

Connelly: Yea, there’s this terrible strain to keep up with everybody. There’s always some bastard trying to be funnier than everybody else, then everybody gets onto it and oh god… I hate that atmosphere.

M: It’s sorta, like, “I gotta get in this, it’s a big cock fight. Who’s gonna win? Who’s got the funniest thing?” I never felt like I won those things.

M: There’s always someone quicker, more clever, and it’s a pain in the ass.

M: Well, that’s not really your thing: you’re not a joke guy, you’re a story guy… you were always a long form guy.

C: Absolutely. And I always like normal people, non-comedians, being funny. This morning I was in the hotel restaurant. One of his friends had seen me at breakfast, so my son texted “how was your breakfast?” I was trying to work out how he knew I was getting breakfast and we were just rapping away and he said, “are you having eggs over easy?” And I said, “does anybody ever ask for eggs over difficult?” And he wrote: “eggs over-reactive.” Which is a much better line than mine. (laughter)

The scene that really sticks in my head is the table of several comedians… workhorses, guys banging it out every night, every one of them throwing their lives at this standup thing, holding nothing back from this as a career.

These are the pros. It reminds me of the tables of pros I’ve seen in my own industry. Most of the time all I want to do is be called up to that table, to fit in, to make them laugh and like me.

But Billy Connolly is different… he’s older, he’s seen more. Everyone knows Billy. He’s a legend. He’s been amazing audiences since before some of the others at the table were born.

That table of pros is not where Billy Connolly aimed himself. Throughout his entire career he’s worked to bring laughter to the working class—his family, his friends, his roots… what he calls “normal people” in the quote above.

Stick with me here…

Can you see the difference between the two scenes?

Billy Connolly made the decision to aim at the second scene a long time ago.

Who you aim at matters. Who are you aiming at right now?

Do you want to win with pros? Do you want to be called up to some table of leaders somewhere to celebrate, riff and dig on one another?

There’s something to it. I want that respect and recognition from my peers.

But these people can’t make your business. These people don’t buy your products. These aren’t your target market (unless you’re a therapist).

And yet I find myself drawn to aim at that table of pros, asking:

Those questions, as we ask and feel them, begin to lead us places… places further and further away from the heart of our target market.

Where we aim matters.

I don’t know if it’s competition, or the hunger for recognition, but that table of pros and the questions it arises in our own hearts make it so easy to lose focus.

We get sucked into vanity metrics or fall into competing with others, find ourselves heading one way instead of another.

These things are like ditches we fall into… we’re moving, but the direction is forced on us… it’s twice the effort to get out of the ditch and pick a better direction than it is to just keep moving with the ditch.

The stories we tell ourselves direct our path…

These stories act like rudders (the thing that steers boats and planes), keeping us on course when the wind regales us.

And maybe we could choose a better story. Maybe instead of getting caught up in what other leaders are doing (the table of pros) we could go long and hard on our audience, hone and shape ourselves and our craft towards them, stay close to them, measure results by our honest-to-god impact on them.

Maybe we could be like Billy Connolly and win the club scene instead of the table of pros.

“Don’t get caught up in what others do. Go long and hard on your audience, hone and shape yourself and your craft towards them, stay close to them… this is your secret weapon.”

I want to do that. It’s very hard. It’s still a challenge.

I want the leaders in my industry to like and respect me, and I can feel myself at times drawn to do things for them instead of for my real target audience.

This is natural. I think we all struggle with this.

It’s not a bad thing to be liked and recognized. But it can be a bad thing when the effort you spend on being liked by leaders pulls you away from focusing on your true audience… that’s where success comes from. And success, ironically, is the thing that makes the table of pros pay attention to you in the end.

It’s an honest struggle to get out of the ditch. But it starts with believing the story… believing that it’s more important to work to kill it in the comedy club than it is to work to make other comedians like us.

Billy Connolly helped me see that. Here’s one of the worlds best comedians, the kind of guy who’s so unfathomably himself on stage, so compelling as a performer, so richly experienced and so goddam funny… and he’s saying, “to me, that table of pros never mattered. It doesn’t affect me if they do or don’t like me. I’m principally focused elsewhere: on the normal people I perform for, on my audience.”

When I remember and believe this story, there’s fresh eyes and ears, a renewed sense of purpose and an easy kind of focus.

I remember WHY I started doing this in the first place… and that’s my secret weapon.

Get to know them

Knowing your audience—the people in the night club—what they want, what they struggle with, what they tell people about themselves (and what they don’t tell)… this is where both great products and amazing marketing comes from.

It takes time to get good at it. Whole companies are built around a single insight… but that insight could take lots of digging, brainstorming and researching to discover.

So I created a small guide to get you started defining and understanding your audience. It’s got a handful of tips, tricks, exercises and worksheets we use here when we put together new websites, products or projects.

Get to your audience. They’re your aim and your rudder. Stay close to them, what they want, what they struggle with, what makes them laugh and raise their fists in excitement…

Do the work to find the right audience for you. Set your aim by them. Your insights about them are your secret weapon.

When the competition and vanity and hunger for recognition grows, get back to your audience… see their need, their pain, the honesty of their struggle, the things you like about them, the things you’re proud of them for… and they’ll bring you back to your WHY and focus you with renewed purpose.

And leave the table of pros to talk amongst themselves about you… and how you’re killing it. You’re like the Billy Connolly of small business 🙂