There are people at the top and then there are the rest of us. And most of us in “the rest of us” camp pay special attention to the folks up top.

We follow them around, dream of them noticing us, fantasize about them becoming our best friends.

It’s human nature to see things in binaries like this.

But I met a group recently that shattered this whole “worship the people up top” view for me. And it’s changed how I approach conferences, bars and anything social.

At a conference in San Francisco I was in a bar with a handful of some real top-tier legends of of the internet. You probably wouldn’t think they were too special, but to me they were heroes.

I had spent most of that day trying to find out where these celebs were going to be. I wanted to make an impression, to be there with a funny quip or something that would make one of these heroes realize I was cool and they wanted to be my best friend.

After an hour or so of hanging around the edges feeling absolutely lonely and ridiculous I saw a small group behaving strangely.

Instead of orienting themselves outwardly — towards the potential “out there,” towards successful people and opportunities — they oriented themselves towards one another.

They weren’t looking over each other’s shoulders to see if they could sneak away and get a quick chat with one of the bigwigs. They were talking, listening, laughing at each others’ jokes as if there weren’t any celebrities in the room.

They looked comfortable, at home in their own skin.

Their behavior was so different than the rest of us in the room.

We were being the “rest of us,” worshipping at the altar of whoever was coolest in the room, hanging around the edges in hopes we’ll get our 5 minutes of face time with one of them so we could tell them about our business and they can realize how great we are… how we’re destined to be besties.

And in that moment the Third Tier Theory crystalized in my mind. It applies to conferences, networking events, any situation where there’s a bunch of like-minded people.

There are three tiers of people in environments like these.

The top and the bottom are easy: it’s the celebs (first tier) and the regular folks (third tier).

But most people don’t realize there’s another tier somewhere in the middle there (the second tier).

This crew of friends I saw was clearly on a different level than anyone else in the room… if only by nature of the fact that they were having a better time.

But it went deeper than that. Or, at least, it has become a lot more than that to me.

People in the second tier make two bets that inform their behavior.

First, they bet that fame doesn’t matter much. It’s awesome that someone is successful enough to merit notoriety. That’s cool. Let that just be cool. Let them be regular people, people you may or may not get along with, people with their own friends, their own needs, their own lives.

Second, meaningful relationships matter most. I’ve had the chance to get friendly with a few folks who were a celebrities to me. And you know what? Once you get past the specialness of it all you get to ask yourself: “do I actually like this person? Are they my kind of person?” Experiences with those questions cause me to value much higher the people around whom I can be unabashedly myself.

In the face of these two bets I realized how much I was messing up and missing out. You guys, we are surrounded by amazing people! You are one of them. So am I. These are my people. These are your people.

And in my attempts to “meet someone cool” I was missing out on the good stuff — the birth of each others’ first born kids, the project launches, the arduous bug fixing nights, the giggles at breakfast as we recited lines from the previous night’s events, the awkward bathroom bonding moments, snuggles.

When we put too much stock in people who are more successful than us, when we see the world in two tiers — black / white, successful / unsuccessful — we miss out on a better network with deeper, longer-lasting results.

The astute reader sees there’s only one real difference between the second and third tier: the second tier knows nobody’s special, everyone’s equally awesome, and it’s important to find the people you have the best time with and invest there.

An even more astute reader sees there are no fucking tiers. There’s only people; people all the way down.

But I find the tiers instructive for this one reason: the point is not to “try to be a second tier person.”

The point is to go all in on the third tier. Realize we’re all on the lowest bit of the totem pole. Then say “fuck the totem pole” and invest in people who make you feel like yourself.

See how that’s different than the blasé ‘try to be a better person’ platitude? The platitude says ‘reach higher.’ Going all in on the third tier says, ‘be who you are.’ You’re already there… act like it.

That crew I saw in San Francisco had undergone some kind of transformation. It reminded me of Josh Brolin’s character in Goonies.

He played the older brother who, at the beginning of the movie, hated babysitting his much younger brother’s friends. He resented them for keeping him away from the cool kids (and from the girl he liked). 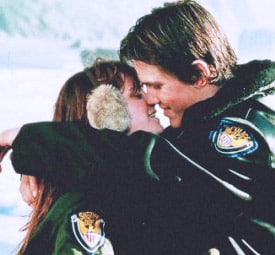 By the end of the movie, however, after all the hijinks and danger and adventure with the kids, he had changed. He saw how awesome those kids were, how brave and smart and interesting. He loved those kids, loved the adventure. He ends the movie smiling and sincere instead of sniveling and cynical. (And he totally gets the girl).

That’s the kind of transformation we need. Not a platitude, but a realization that these kids we get to hang out with at conferences and cocktail parties are awesome… especially the little asian one with all the gadgets. (Please watch the movie; this is not a racist statement).

I implemented this with some friends at the last conference I attended. By the end of the weekend I had educated them all in my little theory about the third tier. I’d chant to them “all in on the third tier, baby!”

They got it. It ended up becoming a little bit of a rally cry for us. It informed how we behaved, how we planned our time, how we invited people into the group.

It was hands down the best conference experience of my life. Hell, it was one of my favorite life experiences in general… complete with epic snuggles and a theme song and a few new life-long friends.

I want to live like the 2nd tier, go all in on the 3rd tier and put my ass on the line for friendships instead of fame.

Go all in on the 3rd tier. Find the people you enjoy. Invest in them. Plan every dinner, lunch, walk, conference, breakfast and hotel choice you can with them, and make the same bet with me. I like our odds.

We mentioned this Third Tier Theory and a bunch of other tips and tricks for getting the most of going to conferences in our most recent podcast episode. Check it out if you haven’t ==> Tips To Make The Most of Conferences (FS032).